Salary of The Indian Team Which Won 1983 World Cup

Indian Cricket was born after the 1983 World Cup in England. The legendary Kapil Dev and the team called Kapil’s Devils won the 1983 Prudential Cup at Lord’s, England, on 25th June 1983 changing the face of cricket in India and across the Globe.

Let’s have some background on the Indian cricket team of Kapil’s Devils vs the mighty West Indies. The Indian team of 1983 was just going to participate in this World Cup in England. This was after two back-to-back disastrous test series in Pakistan and West Indies. They also had a poor record in one-day cricket after poor performances in the past two editions of the World Cup. There were not expected to win more than a match or two.

Now look at the finals. The India Cricket Team was all out for just 183. The West Indies were expected to win with ease. What happened next changed the course of history. Kapil Dev took the legendary catch of Vivian Richards and the West Indies were all out for 140. India had won the Cricket World Cup 1983. Now, you must be curious to know what was the salary of this legendary cricket team called Kapil’s Devils and what the current Indian Team earned after losing the semi-finals of the Cricket World Cup 2019 in England.

Salary of the Indian Team which won 1983 World Cup

What was the Salary of 1983 Indian Cricket Team Which Won the World Cup?

The Indian team called Kapil’s Devils after winning the World Cup 1983 was paid just Rs 200 a day as allowance. The match fees per game was Rs 1,500.

Take a look at the picture of the team sheet along with salaries and also team manager Bishan Singh Bedi from an ODI way back on September 21st 1983. 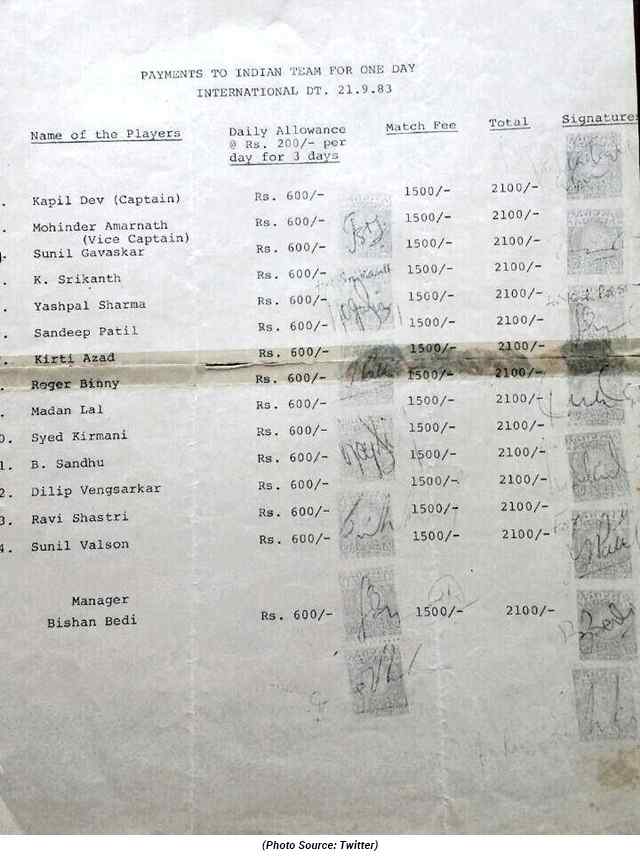 What the Indian Cricket Team Got After Losing the Semi-Finals of ICC Cricket World Cup 2019?

Let’s have a brief history on what the Indian cricket team got from the Cricket World Cups. The Indian Cricket Team which lost the finals of the 2003 Cricket World Cup in South Africa earned at least Rs 7 Million (Rs 70 Lakhs) from the BCCI and also various sponsorship deals across the tournament. The Government of India showered them with rewards.

What about the Indian Cricket Team captained by MS Dhoni which won the Cricket World Cup in 2011? This Cricket Team after winning the 2011 World Cup Final played at Wankhede Stadium in Mumbai (India beat Sri Lanka in the finals) was showered with cash and properties.

The BCCI rewarded each member with Rs 2 Crores and then money from the State and Central Government. The sponsorship deals ran in several crores.

Team India was expected to lift the ICC Cricket World Cup 2019, played in England. Team India dominated the league stages losing a solitary match to England, the eventual World Champions. The hopes of a billion people were torn apart, after India was knocked-out of the semi-finals by the Kiwis. (New Zealand). The team received a whopping $10,80,000 in prize money.

Some of the Richest Indian Cricketers of all Time:

The Master Blaster Sachin Tendulkar took Indian Cricket to new heights. His net worth is an estimated $160 Million or a staggering Rs 1,066 Crores.

Sachin Tendulkar owns 3 restaurants in Mumbai and Bengaluru. He has Properties worth Rs 500 Crores and 10 cars worth Rs 20 Crores.

Sachin has an autobiography titled "Playing it my way". There is a movie made in his honor called, "Sachin: A Billion Dreams."

MS Dhoni is considered to be India’s best ever captain. He has a category A contract with the BCCI and is the highest paid player in the Indian Premier League or IPL.

The former captain and wicketkeeper’s net worth is Rs 734 Crores. As per estimates he earns $12 Million a year. He owns bikes and cars worth Rs 25 Crores. He also owns properties across India worth Rs 522 Crores.

Virat Kohli has estimated net worth of $60 Million which is a whopping Rs 390 Crores. He has properties worth Rs 42 Crores and charges an IPL fee of Rs 14 Crores a season. He has two houses: (In Mumbai and Delhi). He owns 6 luxurious cars worth Rs 9 Crores. He owns a chain of gyms and fitness centers under the brand name CHISEL.