What are debt funds?

These are the types of debt funds

What is capital gain on debt funds?

If you buy A debt fund And sell it for a profit your gains are called capital gains. 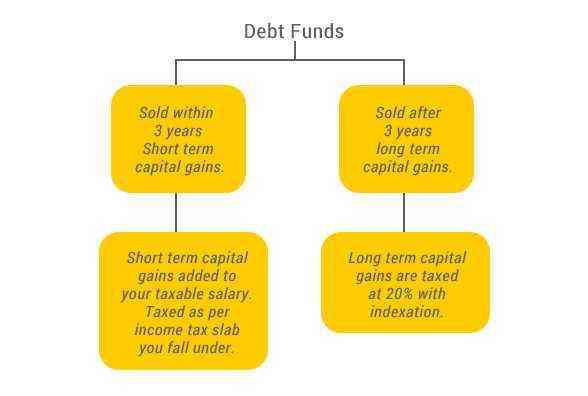 So what is indexation?

Prices of goods such as fruits, vegetables, meat, services such as transport, houses, garments and so on increase with time. This is inflation. Indexation basically means you take the effects of inflation into consideration while calculating tax on your capital gains.

*A debt mutual fund is a type of debt fund

The capital gains are much larger owing to the effects of inflation not being considered when tax is calculated without indexation. Indexation saves tax on capital gains by factoring change in the purchasing power of money due to inflation.

With effect from April 1st 2014 long term capital gains on debt funds are taxed at 20 % with indexation.

You learn from this article that nothing beats staying invested in a debt fund for a long time. The age old saying of Warren Buffett “Always invest for the long term” comes to mind. Even taxation can be beaten if you stay invested for the long term.