FREE Credit Score  Watch Our Videos
Home Articles How Much Money Is Involved in IPL?

How Much Money Is Involved in IPL?

As per 2014 records, IPL is ranked 6th by average attendance among all sports leagues. IPL is the World’s richest cricket league and underlines the wealth of BCCI, the richest cricket Board in the World.

How Much Money Is Involved in IPL?​

The history of IPL dates way back to 2007 when India won the inaugural edition of the World T20 in South Africa. India won a famous victory against arch rivals Pakistan in a thrilling final that ended in the last over. Until 2007 World T20, India had played just one international T20. The Board of Control for Cricket in India BCCI, didn’t believe T20 would take over the cricketing world. Indian team, led by Mahendra Singh Dhoni, winning the inaugural edition of World T20, changed the way BCCI and India looked at T20. This also laid the foundation for IPL.

Kapil Dev started a T20 league by name ‘Indian Cricket League’ in association with Zee Entertainment Enterprises. The Indian Cricket League ICL, was not a league which was backed by BCCI. BCCI banned all players that were playing in the rebel league. To prevent players from joining ICL, BCCI started IPL in 2008.

In September 2007, BCCI announced that it is launching a franchise based T20 league called ‘Indian Premier League’. Lalit Modi, the former vice president of BCCI is the mastermind of the World’s richest cricket league.

IPL was planned by a seven member governing council, which contained former India players and officials from BCCI. With the success of IPL, BCCI came up with Champions League Twenty20 in which the champions (runners up of a few leagues) of various T20 leagues around the globe took part. The IPL is conducted in a double round Robin league format, similar to the Premier League of England and National Basketball Association of United States of America.

Top cricketers from all cricketing nations were interested in being a part of IPL. To decide the owners of the franchises of the leagues, an auction was held on 24th January 2008. The total base prices of the franchises was around Rs 2,800 Crores. After the auction, following cities were chosen as IPL franchises: Bengaluru, Chennai, Delhi, Hyderabad, Jaipur, Kolkata, Mohali and Mumbai. The franchises were sold for a total of USD 723.59 million.

All IPL teams can acquire players through any of the following 3 ways:

i) The annual players’ auction.

ii) Trading players with other teams during the trade window.

Players register for the auction and set their base price and are bought by a franchise that bids the highest. Unsold players in the auction can be picked up by franchises as replacements for unavailable players. During the trade window, a player can be traded at his consent, with a franchise paying the difference, if any, between the old and new contract. If the new contract is worth more than the current one, the difference is shared between the player and the franchise selling him.

The period of a player’s contract is one year and the franchises have an option of extending the contract. Post 2014 season, the player contracts are mentioned in the Indian National Rupee INR, before which the contracts were denominated in US Dollars, USD.

Foreign players can be remunerated in the currency of their choice at the exchange rate on either the contract date or the actual payment date. Prior to 2014 season, Indian domestic players were not auctioned and instead signed up by the franchises at a discrete amount, while a sum of Rs 10 Lakh to 30 Lakh was deducted per signing from the franchise's salary purse. This procedure of signing up Indian uncapped players received a significant opposition from various franchise owners and complained that richer franchises were enticing players with under the table deals. Therefore BCCI decided to include all domestic players in the auction pool and all players are to be bought only by purchasing them at the annual players’ auction.

As per 2015 survey conducted by Sporting Intelligence and ESPN The Magazine, the average IPL salary on a pro rata basis is USD 4.33 million per year, the second highest of all sport leagues across the globe. As all IPL players are contracted for the duration of the tournament, which is less than two months, the weekly IPL salaries are extrapolated pro rata for obtaining average annual salary, which is very much unlike other leagues in which players are contracted by a single team over the entire year.

In 2011, Kochi Tuskers Kerala was terminated as it breached BCCI’s terms and conditions. In September 2012, the BCCI terminated Deccan Chargers. Auction was held in October 2012 and Sun TV Network won the bid for the Hyderabad franchise and named the franchise as Sunrisers Hyderabad.

Pune Warriors India withdrew from IPL due to financial differences with BCCI in May 2013. The franchise was officially terminated in October 2013 as the franchise failed to provide requisite bank guarantee.

Inaugural champions Rajasthan Royals and three time champions Chennai Super Kings were suspended for two seasons, starting from 2016, as the owners of the franchises were involved in betting scandals. BCCI revealed that Pune and Rajkot would be the two teams that would replace Chennai and Rajasthan teams until their suspensions were over. The new teams were named Rising Pune Supergiant and Gujarat Lions. These franchises were terminated in 2018 as the franchises of Chennai and Jaipur completed serving their suspensions.

The below table summarizes the title sponsorship deals:

The 19% jump is despite the fact that the US dollar to Indian rupee currency has weakened by nearly 10%. The managing director of Duff & Phelps India stated: "What IPL has achieved in this short time is phenomenal. Not just in India, but internationally also. This IPL season has grabbed the eyeballs for all the right reasons with a relatively controversy free tournament, coupled with some scintillating on-field performances which have brought the spotlight back on the game".

The table below shows the brand value of all IPL teams:

IPL broadcasting rights were bought by Sony Pictures Networks and World Sport Group for a ten year contract valued at USD 1.026 billion for ten seasons starting from 2008 till 2017. As per the deal, Sony broadcasted for the domestic television while World Sport Group broadcasted, internationally. The starting plan stated that 20% of the proceeds would go to IPL, 8% towards prize money and the remaining 72% would be distributed amongst the franchises from 2008 till 2012, post which IPL would go public by listing its shares.

IPL became a major television property in India. Sony MAX became the most viewed TV channel in India during the months of April and May. In 2016, annual advertising revenue crossed Rs 1,200 Crore mark. Viewership was expected to increase further during the 2016 edition as the industry adopted new BARC ratings system which included rural viewers.  In 2016 edition of IPL, Sony's broadcasts crossed 1 billion impressions, jumping to 1.25 billion in the next year.

In September 2017, BCCI announced that Star India, the then current digital rights holder, had acquired the global media right of IPL for a period of five years for a sum of a whopping USD 2.55 billion, which is 158% more than the previous deal. This is the costliest broadcast rights deal in cricketing history. BCCI sold the IPL rights in packages of domestic TV, domestic digital and international rights, although Sony still held the highest bid for domestic TV and Facebook made USD 600 million bid domestic rights.

Star CEO Uday Shankar said IPL is a very powerful property. He also said that “Star would remain very committed to make sure that the growth of sports in this country continues to be driven by the power of cricket".

Star focused on enhancing the IPLs appeal with a core cricket audience in their first season. Star aimed at broadcasting IPL related shows for a minimum of two hours each day from January till the start of season. Star also telecasted programs of player retention, auction and appointment of captains. This enhanced the viewership to 46.4 million.

The global broadcasters of IPL are: 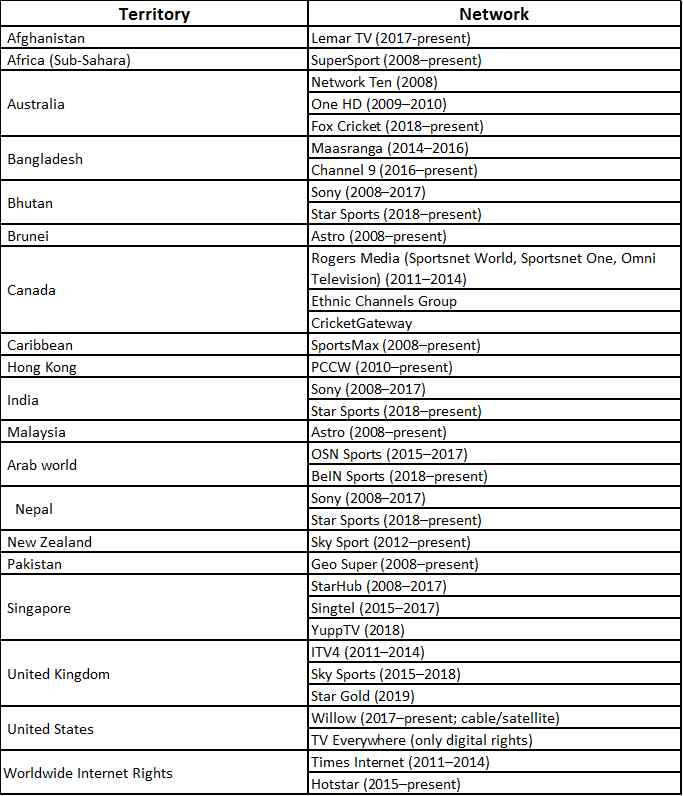 Most IPL matches are played in front of jam packed crowds. Whole of 2009 edition was staged in South Africa due to the general elections but this didn’t have an impact on the crowd attendance. Initial stage of 2014 edition was conducted in UAE, for the same reason of general elections and still saw a full house. IPL franchises get to keep a share of revenue generated by sale of tickets and this is the reason why each team has 7 home games.

Who Gets Paid The Most In IPL?

Virat Kohli, the captain of Team India in all three formats, is also the captain of Royal Challengers Bangalore. Virat Kohli was signed up by the Bangalore based franchise for Rs 20 Lakhs in the inaugural edition and now gets paid a whopping Rs 17 Crore per season, making him the most expensive player in the history of Indian Premier League.

Let’s have a look at the list of highest paid players bought in players’ auctions of each edition: