FREE Credit Score  Watch Our Videos
Home Articles What is a Recession?

What is a Recession?

If the economy declines significantly for at least 6 months, it’s a recession. You would find a drop in real GDP, employment, manufacturing, retail sales and income. Many people believe that if GDP growth is negative for 2 successive quarters, it’s a recession.

Gross Domestic Product or GDP is the total value of all goods and services produced within the geographic boundaries of India, during a specified time period. India is expected to grow at 7% in 2019 and 7.2% in 2020.

For many years policy makers used to look at GDP. Now, they are looking at GVA or Gross Value Added. This is nothing but the rupee value for total goods and services in the economy; after deducting the cost of inputs/raw materials which go into the production of these goods and services.

What is a Recession?

Warning Signs of a Global Recession

Donald Trump is all about “America First”. The US President imposed 25% import tariffs on steel against China, EU, Canada, Mexico and India. (Tariff is a tax imposed on goods and services from other countries. This increases their price making imports less desirable).

Around $250 Billion worth of goods and services which are produced by China and imported into USA have a 25% tariff. China will impose $75 Billion worth of duties on US goods from September 1st and December 15th. Trump has added tariffs on Chinese imports worth $550 Billion in trade war reprisals.

See Also: What is GDP? Types, Growth Rate and Per Capita Income

This tit-for-tat response between US and China called a trade war is pushing the global economy into a recession.

German economy is on the brink of a recession. Business confidence has plunged to the lowest level in 7 years. German GDP would shrink this quarter after already contracting by 0.1% in the past 3 months. The German economy is going into a recession for the first time since 2013 as the German industrial sector has been badly hit by the US-China trade war.

China is facing a full-blown debt crisis. Chinese consumers and state industries have borrowed heavily. Chinese Banks have given a lot of loans and the question is will these loans be repaid. The Chinese Government wants to control excessive consumer and corporate lending, but as the global economy is tottering, they had to loosen credit. Chinese industrial production is at a 30 year low at 4.8%. The Chinese Government plans to shift the economy from manufacturing to services, but this would take time.

Brexit means Britain and Exit or Britain’s exit from the European Union. British citizens voted on June 23rd 2016 amidst a raging refugee crisis to leave the EU with a 52% vote. If the UK leaves the EU without a deal called No-Deal Brexit, the economic damage would be severe. The UK GDP contracted 0.2% between April and June.

See Also: What is an Economy?

How to Identify a Recession?

What is an Yield Curve?

Take a look at yield curve of Indian Government Bond: 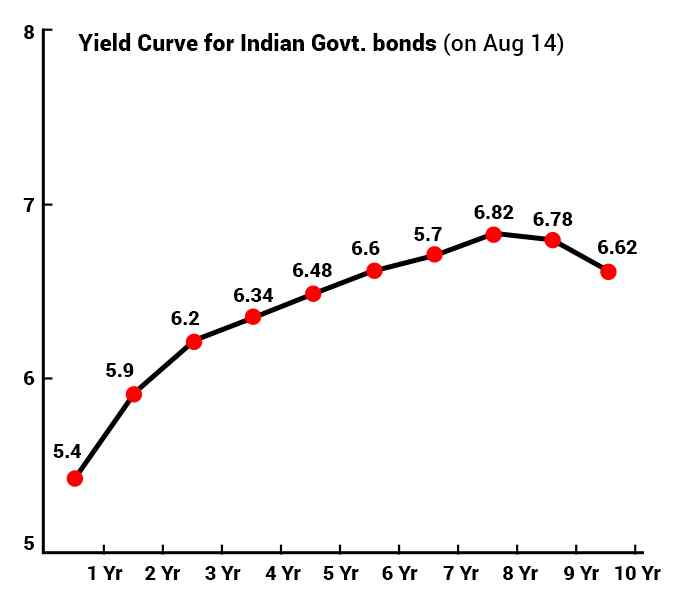 The yields from 9 and 10 year bonds have fallen below the yields of 8 year bond. (The yield curve is in tandem for now). Inverted yield curves have predicted 9 recessions.