Why Akshaya Tritiya is a Good Time to Buy Gold?

What is Akshaya Tritiya?

Akshaya Tritiya is celebrated by Hindus and Jains. It signifies the "third day of unending prosperity".  Akshaya Tritiya date varies and is as per the lunisolar Hindu calendar. It usually falls in the months of April or May in the Gregorian calendar.

Why Buy Gold on Akshaya Tritiya?

India’s love for gold never dies. India is one of the biggest consumers of gold in the World. India’s gold reserves are over 550 tonnes and the total gold in the country is estimated to be about 20,000 tonnes. With such addiction to gold, it is safe to say that Indians don’t really need occasions to buy gold. An auspicious day will only add to this love for gold. Gold sales peak on Akshaya Tritiya.

Millions of Indian households purchase gold on this auspicious day as it is believed that investing in gold on this day signifies the start of a new beginning. Investments made on Akshaya Tritiya are believed to bring prosperity and gold, which is believed to be an ideal investment in India, is purchased across the country.

Apart from the aspect of auspiciousness, it's also the utilization and reputation of being a great investment option.

As per the Drik Panchang, the auspicious time to buy gold and Puja Mahurat are as mentioned below:

Following is the significance of Akshaya Tritiya:

Auspicious Days to Buy Gold in 2019

Below is the list of days when Pushya Nakshatra is celebrated in 2019: 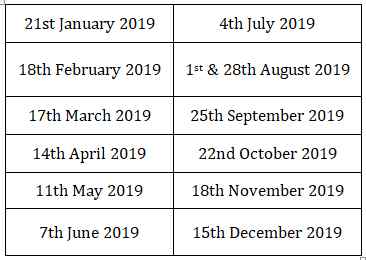 Which God is worshipped on Akshaya Tritiya?

SEE ALSO: Should You Buy Gold This Akshaya Tritiya?