FREE Credit Score  Watch Our Videos
Home Articles Why Is Petrol So Expensive In India?

Why Is Petrol So Expensive In India?

Petrol prices are revised across the country by State-run oil marketing Companies like IOC, HPCL and BPCL on a daily basis. Prices are fixed depending on the International Crude Oil Prices and Rupee-Dollar forex rates. The people are asking, why is petrol so expensive in India when the price of imported crude oil is low.

Why Is Petrol So Expensive In India?

You must be familiar with the state-run oil Companies, Indian Oil, Bharat Petroleum and Hindustan Petroleum, which control 92% of the fuel market in India. The Indian Government has always controlled the prices of Petroleum Products like Diesel, Petrol, LPG and Kerosene in India. This is to keep inflation in check and also for political reasons.

Unfortunately, we import 82% of our annual crude oil requirements. This crude oil is refined and then marketed by state-run oil Companies. The Government used to subsidize petrol and state-run oil Companies had to bear the losses.  Let’s understand this in a simple way. Get familiar with the word under recovery. This is nothing but the difference between the selling price of a petroleum product and the cost of the same, had it been imported and processed from the international market.

SEE ALSO: Bank Could Soon Charge You For Everything

2. Are petrol prices high because of Taxes?

Believe it or not, taxes increase the sale price of petrol by a whopping 90% over the dealer price. Dealers are individuals/businesses who may own petrol pumps. They sell petrol to end-users (retail customers) after adding taxes and their margins.

This table shows the components of petrol prices in Delhi 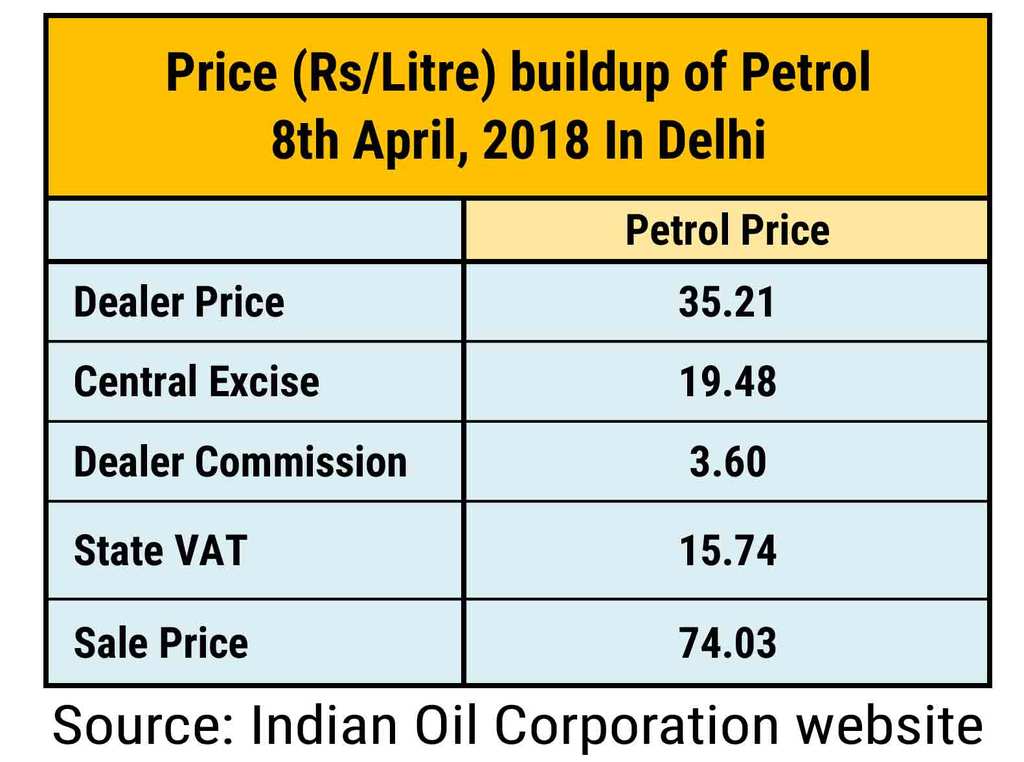 In this table which shows the Petrol Price in Delhi on 8th April 2018, you will see the dealer price is just Rs 35. The Central Excise is Rs 19.4 and State VAT is Rs 15.74. Together this is around Rs 35, which is same as the dealer price. This has to be the culprit.Remember, the State and Central Governments earn a lot of revenue through a tax on petrol. Will they give it up?

SEE ALSO: How To Calculate Your Taxable Income?

3. Should Petrol be brought under GST?

It would be great if petrol could be brought under Goods and Services Tax or GST. Even if petrol is slotted in the highest slab, it could be taxed at just 28%. This is much lower than the current level of taxation. But there’s a problem. State Governments enjoy a lot of revenue by taxing petrol and other fuels. If Petrol is brought under GST, they could lose a lot of money.

This problem can be solved by looking at GST in Western Countries. State Governments should be allowed to continue charging State VAT. Instead of Central Excise, GST could be charged. Under GST, businesses could enjoy an input tax credit. Input credit means at the time of paying tax on output, you can reduce the tax you have already paid on inputs. Be Wise, Get Rich.