Will GST On Petrol Reduce Prices?

But, more needs to be done. Many citizens are talking about bringing Petrol under GST to reduce prices. Truck Owners and Truck Operators are on strike and want Diesel to be brought under GST.

Is this the solution? Will bringing Petrol under GST reduce prices? Let’s find out. Want to know more on Investment Planning? We at IndianMoney.com will make it easy for you. Just give us a missed call on 022 6181 6111 to explore our unique Free Advisory Service. IndianMoney.com is not a seller of any financial products. We only provide FREE financial advice/education to ensure that you are not misguided while buying any kind of financial products.

Will GST On Petrol Reduce Prices?

Petrol prices have been rising in the last few weeks in major metro cities and high International Crude Prices are being blamed. But, is this true or is something else pushing up the Petrol Prices?

Take a look at this Table: 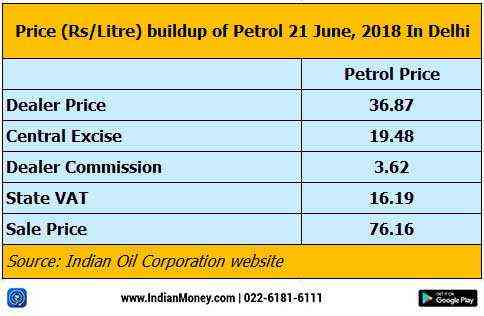 You must have noticed that the cost of a litre of Petrol at dealer level is just Rs 36.87 (This is for June 21st 2018).  This is also called the price at the refinery gate. Do account for dealer commission of around Rs 3.6.

Remember: VAT is levied by States and changes across States. It’s the lowest in the Andaman and Nicobar Islands at just 6%. Mumbai has a VAT of 39%.

Will bring GST on Petrol? How GST Works on Fuel Prices?

There is no pure GST anywhere in the World. It’s always a combination of GST + VAT. According to the rules of GST, the total amount of tax on particular goods and services has been kept at the same level as the sum total of Central and State levies, prior to GST. (Before July 1st 2017).

So, petrol would have to be slotted in the 28% GST Slab and States would be allowed to charge some amount of VAT on Petrol.  This is because the Government cannot afford to compensate States for the loss in revenue.

Remember: States would have to adjust VAT such that the overall level of taxation on Petrol cannot exceed present levels.

GST is believed to be the cure for high petrol prices. But, petrol prices will not come down, unless the Center and States decide to only charge a GST of 28%. This means States would have to forego revenue as they cannot charge VAT, which they are not willing to do.

GST is Ad Valorem. It is charged as a percentage on the refinery gate price. This means that when benchmark International Oil Prices go up, refinery gate prices also go up and so do retail prices of petrol. The opposite is also true.

Central Excise is a fixed levy/charge and does not change with the change in prices. But, States profit when oil prices rise. This is because States earn money through Ad Valorem VAT. It means States charge VAT based on the value of the oil. So, if oil prices rise, States make profits.

What do you understand by this? Bringing Petrol under GST would not bring much relief to customers suffering from high petrol prices. This is because petrol would be slotted in the 28% GST slab and States would charge VAT in such a way that the total taxes on Petrol remain more or less the same.

However, Oil Refineries would get the benefit of Input Tax Credit if Petrol was brought under GST. Input tax credit means at the time of paying tax on the output, you (manufacturer/refinery) are allowed to deduct the taxes already paid on inputs. You just have to pay the balance amount. This benefit could be passed on to customers bringing a measure of relief in the Petrol Prices.